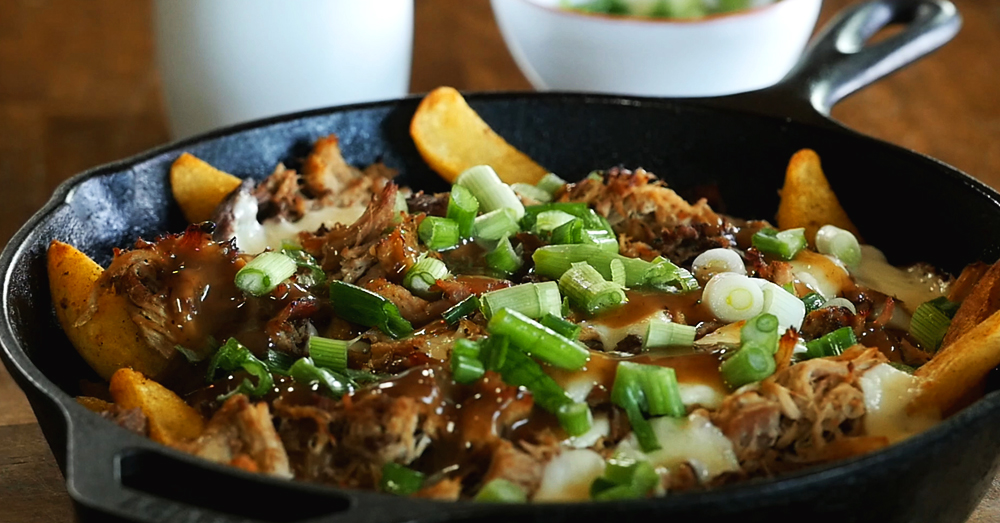 Oddly enough I discovered the world of Poutine while attending university in Canberra, Australia of all places. The Aussies taught me a lot about life, most of which was centered around the importance of drinking alcohol like a man. I soon came to learn that an important factor in the mathematical equation of alcohol intake against hours in the day is french fries, or as they called them: Chips. Chips and gravy was a big part of my life those 3 years. Why was this not a thing in America? Is the world conspiring against us? Which Senator do I send a gravy-soaked petition to in order to name Poutine a national treasure? I had many questions I needed answers to.

Over time, the questions subsided and I ventured deep down a gravy slathered hole. “This is the best thing that ever happened to me,” I said to my roommate Jono while eating a pile of simple string fries, covered in brown gravy out of a paper cone we had just purchased from the local University food truck. “I’m just so happy right now.” And I was.

Jono looked at me and quickly realized that I was yet a baby bird in the world of Chips and Gravy. He understood that American’s were lightyears behind on this culinary track and in that moment he took it upon himself to blow my fucking mind. “OI! Mate!” he yelled at the cook in the truck. “Get this bloak some Poutine!”

Poutine? The name instantly rang true as if I’d known it my whole life. So many questions instantly sprang forth. My senses heightened … vision focused … stomach growled. It’s like my body knew something magical was about to happen. The man reappeared into that truck window with what can only be described as what was inside the briefcase in Pulp Fiction. I was home. And then the rest of my life happened.

So here we are today, the inaugural Poutine post here at Grizzly Fare. And we’re gonna keep it simple, by adding some pulled meat and green onion garnish to the classic dish. To replicate ours, feel free to get your pig drunk with this recipe: Slow Cooker Beer Pulled Pork. Truthfully though, any pulled meat will make you happy. Treat this recipe as a platform from which to spring forth your best creativity. Your next move is to watch this video, then get your Poutine on. You’re welcome.